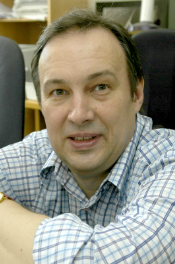 Alexander Razborov received his B.S. degree from Moscow State University in 1985 and his PhD and Doctoral degrees from the Steklov Mathematical Institute in Moscow (1987 and 1991, respectively). He has been on the Steklov faculty since that. In 2000-2008 Dr. Razborov was holding a visiting position at the Institute for Advanced Study, and in 2008 he joined the CS Department at the University of Chicago as a Professor.

Dr. Razborov’s primary research area is complexity theory, and he is specifically interested in circuit complexity, proof complexity, quantum computations and communication complexity. Previously he made contributions to combinatorial group theory, and currently he is also exploring some areas in discrete mathematics like extremal combinatorics.