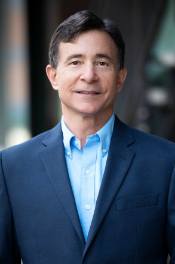 Matthew Turk is the third President of TTIC. He earned a PhD from the Massachusetts Institute of Technology, an MS from Carnegie Mellon University, and a BS from Virginia Tech.

Prior to joining TTIC in 2019, Turk was a full professor at the University of California, Santa Barbara, where he continues as Professor Emeritus. His primary appointment was in the Department of Computer Science, where he served as Department Chair from 2017 to 2019, with a secondary appointment in Media Arts and Technology, where he served as Chair from 2005 to 2010. He also had affiliate appointments in Electrical and Computer Engineering and the Dynamical Neuroscience Program and was involved in several interdisciplinary organizations across campus.

Turk’s primary research interests are in computer vision and machine learning, augmented and mixed reality, and human-computer interaction. He has received several best paper awards and has been general or program chair of several major conferences, including CVPR, WACV, ACM Multimedia, IEEE Face and Gesture Recognition, and International Conference on Multimodal Interaction (ICMI).

He brings a dynamic background of academic, industry, and entrepreneurial experience to the role of President. In 2000, Turk helped to found the Vision Technology Group at Microsoft Research, and he brings additional industry experience gained in working with a small Silicon Valley company and a large aerospace company. In 2014, he co-founded a startup company that spun out from NSF-funded research in his lab and was acquired in 2016. He is a Fellow of the ACM, the IEEE, and the IAPR and was the Fulbright-Nokia Distinguished Chair in Information and Communications Technologies.

Dr. Turk also has a personally maintained website which can be found at http://www.ttic.edu/mturk.