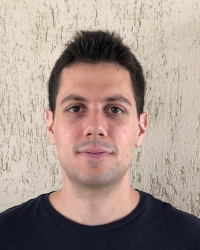 After graduating from TTIC in June of 2018, Dr. Haris Angelidakis joined ETH Zurich as a Postdoctoral Researcher. After spending two years in Zurich, he was considering whether he should continue on an academic path, or to look for an industry position. Dr. Angelidakis enjoys research, and liked the work he was doing at ETH Zurich, so it made sense to continue with another postdoc opportunity at TU Eindhoven, in the Netherlands.

“TU Eindhoven in particular was one of the places that people are conducting research close to my interests. I didn’t personally know Laura Sanità, the professor whose group I eventually joined, but I was familiar with her work, which seemed very interesting, and moreover, professor Rico Zenklusen, who was my mentor in Zurich, knew her, and was very positive about me applying to her group. I eventually applied and got an offer, and it seemed very interesting. So I thought, of course, it’s a good opportunity,” said Dr. Angelidakis. Currently, he is conducting research in theoretical computer science, particularly in approximation algorithms.

His interest in computer science began as an undergraduate, in the School of Electrical and Computer Engineering at the National Technical University of Athens. “In Athens, I did a five year program where at the end of it, I got to do an undergraduate thesis. As I was approaching the end, I had already taken a couple of courses in Algorithms, Computability and Complexity, all offered by the Theoretical Computer Science Lab of the Department. It was a very active lab, and I would say that this was the first thing that captured my mind. There were a lot of students there, and the professors were very interested in working with students, so that was how I got into this broader field of theoretical computer science,” he said.

After participating in some reading groups, attending student presentations, and getting his hands on a book about approximation algorithms, he found his niche. He ended up writing his undergraduate thesis on approximation algorithms, and wanted to continue that research after completing his undergraduate degree. After spending some time working with a professor in Athens as a postgrad, he began applying to PhD programs.

He chose TTIC for his PhD because of the wealth of resources for research in his field. His advisor was Prof. Yury Makarychev, but he also had the opportunity to work with Prof. Julia Chuzhoy, and Prof. Avrim Blum, who all conduct research related to algorithms. Dr. Angelidakis also appreciated the amount of freedom he was able to enjoy as a student at TTIC, with minimal TA responsibilities and the time to dive deeply into his research.

“Since it’s a very small place, you get to know everybody right away. You feel at home there, in the sense that most people are very approachable. Every door is open, so you can just knock and talk to anybody you want to in any office. Although it’s a very active place, it doesn’t have a tense kind of vibe, it’s a pleasant atmosphere to work in and be around every day. It’s not an impersonal kind of huge building, it’s very friendly. Even the aesthetics of the place are interesting, with these open spaces and whiteboards all around,” he said. “I think TTIC was the right decision for me.”

His advice to current PhD students is to spend plenty of time with their advisor. Pursuing a PhD requires a significant amount of dedication, and being able to keep yourself moving even when things get hard. Advisors can provide advice and support to keep students going through difficult times, and put things in perspective.

Dr. Angelidakis also encourages current students to take advantage of all of the resources that TTIC provides as far as talks, visitors, and exposure to new ideas. “The amount of research you hear about in an environment like TTIC is huge. There are so many things to learn and so many people to talk to. Combined with the UChicago seminars and activities, this is very hard to find in other places. I would suggest that people try to take advantage of it. Talk to as many people as you can, learn as much as you can to broaden your horizons. It’s a great opportunity, use the time you spend at TTIC to really catch up with research and be up to date about what’s happening around the world,” he said.

Completing a PhD can be an arduous undertaking, and that is the accomplishment that Dr. Angelidakis is most proud of. Even in an ideal environment, with a breadth of resources, it can be difficult to commit six or more years to finishing the degree. He remembers dealing with insecurity, and getting stuck at several points along the way. With the help of his advisor, Prof. Makarychev, he was able to keep calm and commit to getting it done, and even managed to have two papers accepted at top tier conferences.

“This was, at least for me, not trivial at all to manage to get a paper accepted in a conference where you thought there was no chance of doing it. Of course, a lot of this has to do with Yury, who guided me and helped me throughout. Managing to be a part of this group that you thought of as very elite was so satisfactory,” said Dr. Angelidakis.

Since leaving TTIC, he has been looking at problems from a theoretical perspective, and trying to solve them using math tools. His work is purely theoretical, but he believes that the algorithmic way of thinking that he has developed over the last few years can be applied to more practical work as well. When researchers work in theory, they develop skills and a knowledge base that someone who solely works on more “practical” problems may not have been exposed to.

Due to the ongoing COVID-19 pandemic, Dr. Angelidakis has had a lot of time to think about the next steps in his career. In order to maintain a good work-life balance, he is fairly certain that he will pursue opportunities in industry when his postdoc contract ends. He would still like to find a role that has research components, such as in a research lab in an industry sector, but he doesn’t think he will pursue a career in academic research in the immediate future. “Although I do like the idea of getting a faculty position, I think it’s time to try to find a good balance between my personal and professional life,” he said.

Though nothing has been finalized, he will be looking for a new position after his contract at TU Eindhoven ends next fall. Ideally, he would like a position where he can use the skill set that he has developed over the last few years, and remain close to problem solving and an algorithmic way of thinking.