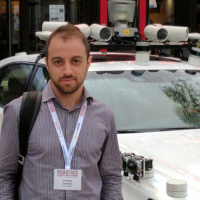 When fifth-year PhD student Andrea Daniele was growing up in Italy, nobody in his hometown had a computer. As a kid, the only person he knew that had a computer was his uncle, and he asked his parents to visit as often as possible. The excuse was to play with his cousins, but in reality, he wanted to go there to play with the computer. His uncle worked as a geologist, and had a computer that ran on Windows 95. Since it didn’t have any computer games, he would look through the files, and try to figure out how the operating system worked.

That was when he first became fascinated by computers. Daniele learned about robotics as a teenager, when he visited a museum and saw a group of university students demonstrating a small robot. “There was this cute little robot with a small camera trying to follow a black line that was drawn on the floor. That was my first experience with robotics, and after that, I was drawn into robotics and computer science forever,” said Daniele.

Though Daniele has been passionate about his field of study since a young age, he didn’t see himself pursuing a PhD until he found TTIC. As a high school student, he didn’t think he wanted to go to college at all. Nothing less than serendipity brought him to where he is today, as he didn’t think he wanted to pursue a master’s degree either, but at every step of the way, he decided to keep moving forward with school. He spent seven months in 2016 working on his master’s thesis with Professor Matthew Walter, and those seven months changed his perspective.

“I came from a big university back in Rome, in one of the biggest cities in Europe, so I always felt like I was a number. But then, TTIC was so small, and everybody knew my name. It was like another family to me, so I wanted to stick around. I really enjoyed what I was doing,” said Daniele. He received his bachelor’s degree in computer engineering from the University of Calabria, and his master’s degree at the University of Rome - La Sapienza, where he worked under Professor Daniele Nardi.

Daniele’s research at TTIC has centered around human-robot interaction based on natural language. This means he wants to create robots that can understand text and speech like a human in order to better interact with them. His most recent project was about teaching robots to manipulate household objects, like a refrigerator, or a cabinet.

“The common thing with all of these objects is that they are what we call articulated objects. That means there is a part that doesn’t move, like a door frame, and then there’s something that moves, which is the door itself. You can describe that as the door moving with respect to the frame. Then if you focus on the door, the door has a handle, which also rotates, but that rotates with respect to the door. You can think about this as a tree, or a graph of objects in the world that move with respect to each other,” said Daniele. The goal is for the robot to understand, for example, when it is told to go to the kitchen in spoken language, that it will have to operate the door handle and push open the door.

Recently, he has become more interested in interaction between robots, rather than between robots and humans. Daniele has worked on a project with Prof. Walter called Duckietown, which focuses on the interaction of autonomous vehicles that cooperate with each other. He is interested in exploring how if a problem cannot be solved by one robot on it’s own, it could be solved by multiple robots working together.

“It’s very interesting, because you don’t need to rely on something that exists, like English. If you have two robots, they don’t have to speak English, they can talk in whatever language they prefer. Maybe there is a better language for that, right? If you have a human in the loop, then you have to force the robot to use that same language. But if there are just two agents, they don’t have to stick to anything. They could come up with their own language,” he said.

Daniele appreciates that while TTIC is small, it covers several different areas of computer science. This is invaluable to someone studying robotics, as it is a highly interdisciplinary field. Robotics combines speech, computer vision, planning, and several other types of problems. With expert professors in a variety of areas, there is always someone to go to when different questions arise.

Another thing he has enjoyed about being a student at TTIC is the freedom to conduct research that interests him. That being said, it can be difficult to have that much freedom in an academic program. Daniele remembers wanting to rush through a lot of early classes, to get them out of the way as soon as possible. As a first year, a fifth year student told him not to rush, and that is the same advice that he would pass on to those in early stages of the program now.

“He told me to enjoy this time. In classes, you have people telling you what to do. They give you assignments, they give you projects, and you can fill your day with those things. The moment you finish those classes, you have to fill your days with research, and when you’re stuck in a place where you don’t have a project, you’re looking for a project, or you just finished one, that’s hard because you have to show up for work and have nothing to do. That’s trickier than taking classes. What I would say to a new student is take your time. Sometimes if you take your time and do the classes at the right time, they will give you those ideas that you need for research,” he said.

As he is wrapping up his penultimate year at TTIC, Daniele is fairly sure he’d like to find an industry role after graduation. As two of his degrees are in engineering, he feels that may be a better fit than academia, but he is willing to keep his options open and see where the next year takes him. This summer, he is looking forward to traveling the U.S. with his wife.