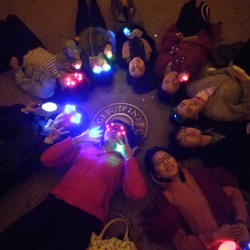 She decided to shift her focus from hardware to software as a master’s student, to explore coding and creating algorithms. Gao works with Professor Kevin Gimpel on Natural Language Processing (NLP), and has been conducting research on comparing and interpreting different NLP models.

Put simply, generative models are used in unsupervised machine learning, and they create new data. Discriminative models are used in supervised machine learning, and instead of creating new data, they interpret existing data. Her goal is to better understand how these models work, so that she can create more effective NLP models in the future. The ability to create more robust applications is also something she would like to explore.

At this point in the program, Gao has completed all of her course requirements, and is focusing primarily on research. She most enjoyed taking courses on natural language processing and algorithms. “I hadn’t taken any algorithm courses before I came to TTIC, and I feel there are so many fantastic algorithms. They’re quite efficient and useful,” said Gao.

She chose to come to TTIC for her PhD because it is a small, focused institution. “It has a great environment. Although there are fewer people here, they are all very friendly,” she said. Before the COVID-19 pandemic temporarily closed the campus, she often made coffee in the kitchen at TTIC, and enjoyed speaking with colleagues over a mug or two.

Outside of research, Gao is a member of the new Diversity, Equity, and Inclusion committee. When she first applied to be a part of the committee, she didn’t know much about diversity and inclusion initiatives, but she has learned a lot since joining, and hopes that the committee will continue to have a positive impact on life at TTIC. Gao also takes part in a speech and language group, where interested students and professors come together to rehearse presentations, share ideas, and debate.

As far as her future goals, she wants to remain open to different possibilities, and not plan too far ahead. “It’s hard to plan for the future when there are so many elements,” said Gao. “Anything is possible.” She is currently preparing her thesis proposal, and wants to focus on doing good research and learning as much as possible for the time being.